The claim that Twitter is bringing in a subscription system which will allow supporting
users through monthly donations of 5-100 lira is false. Twitter’s New Terms of Service
and Privacy Policy do not include any updates on the subscription system. Besides, the
user, who raised the claim, also admitted that it was a joke.

A social media post shared on 4 th December 2019, claiming that Twitter will soon
introduce a new subscription system which will allow for supporting desired users
through monthly donations between 5-100 lira, received close to 400 likes and 30
retweets. 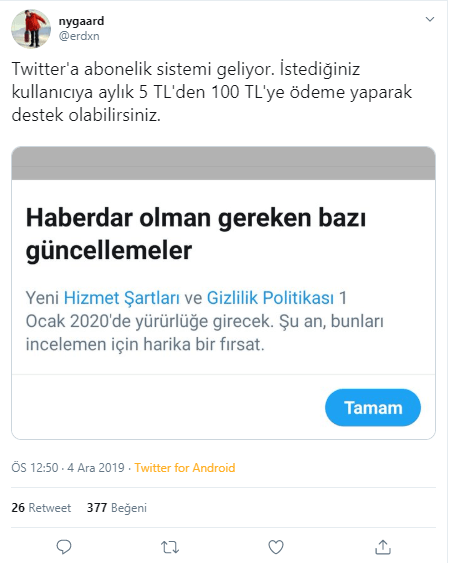 But the claim, which even popular users including famous food enthusiast Vedat Milor,
TivitMag and Dark Web Haber were tempted to share, is false. The user named
@erdxn, who was the first to bring up the claim, said it was not true. Moreover, there is no subscription system-related update in Twitter’s New Terms of Service and Privacy
Policy.

According to sources such as Daily Mail and Cnbc-e, the updates are introducing
certain restrictions on political advertising in an effort to avoid info pollution in this field.
Teyit contacted @erdxn only to find out that he posted the tweet just for fun, presuming
that nobody would read the new terms of service and privacy policy for it is in English
and too long. 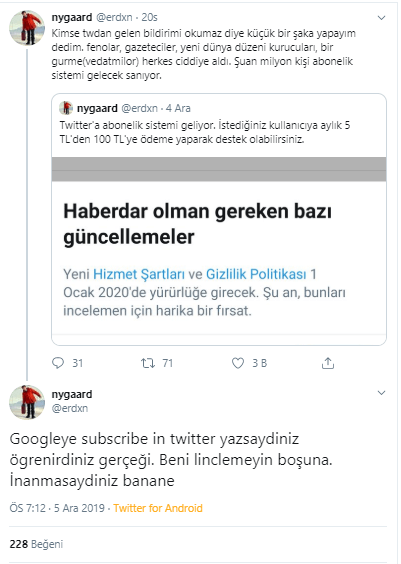 Indeed, his presumption was correct. According to a 2016 research by Jonathan Obar
from York University and Anne Oeldorf-Hirsch from Connecticut University, majority of
internet users accept license agreements, terms of service policies, privacy policies and
online agreements without reading them, hence, becoming part of the “biggest lie on the
Internet”.

In conclusion, the claim can be labelled as “parody content”.

Talking with owner of the claim, 6 December 2019

Talking with owner of the claim, 6 December 2019