Is Turkey to import horse donkey and mule meat from Sudan without any duties?

A recently signed agreement with Sudan raised claims that Turkey is going to import horse, donkey and mule meat from the African country without any duties imposed. We have taken a closer look at the story in an in-depth analysis.

Food safety is among the most frequently covered topics in Turkey. As concerns over safe food rise, so does the public impact of news related to this field. According to a recent report by Hüseyin Hayatsever of opposition daily Cumhuriyet, a trade and economic partnership agreement signed between Turkey and Sudan on 27th November 2017 enabled free import of some 500 tonnes of horse, donkey and mule meat as well as the organ meats of these animals from the East African country. 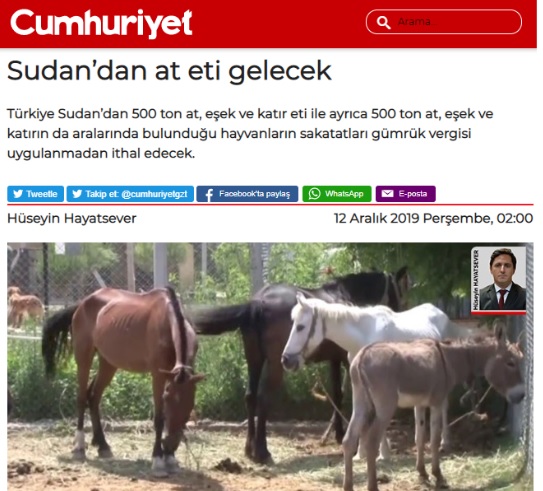 Horse meat to be imported from Sudan
Turkey is to import 500 tonnes of horse, donkey and mule meat, as well as 500 tonnes of organ meat, including those of the said animals, without any customs duties imposed.

Claims based on this report spread like wildfire on social media and various news websites, creating a cascading concern. For instance, a tweet by prominent sociologist, Emre Kongar got 521 retweets and 1,600 likes. 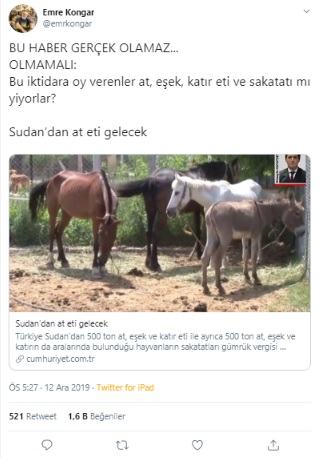 This story cannot be true. It shouldn’t. Do ruling party voters eat horse, donkey and mule meat and organs?

However, the topic is a little more complex than it seems and hence, deserves a more in-depth analysis for taking the shortcut and simply labeling it “true” or “false” would not only be misleading, but also mean predicting the future.

It is true that Turkey signed the said agreement which allows for importing certain product groups from Sudan without any duties. International treaties between Turkey and third countries can only enter into force after being ratified by the Parliament and subsequently approved by the President.

The motion to ratify the agreement, which allows, among many other types of commodities, for importing 500 tonnes of horse, donkey, mule and hinny meat as well as edible organs of these animals with an 100% discount on intra-quota tariff, was submitted to the Parliament on 15th October 2019, but is still pending discussion at the General Assembly, with no date in sight.

Besides, ratification of the agreement does not necessarily mean the said products will actually be imported.

TurkStat’s foreign trade statistics also indicate that Turkey has not imported any horse, donkey or mule meat or their edible organs since 2000.

Minister of Agriculture and Forestry, Bekir Pakdemirli denied the claims, blaming it on a misunderstanding that arose from the fact that many different types of meats all fall under the same generic commodity description, namely the Customs Tariff Statistics Position (GTIP). However, Teyit found that, as opposed to the minister’s statement, the GTIP numbers are clear-cut descriptions, referring to specific products.

According to the Chamber of Agricultural Engineers President, Özden Güngör, imported mule, donkey and horse meats and organs may be used in animal food. However, Güngör does not rule out the possibility of these meats ending up in human food and urges increased inspection. President of the İstanbul Chamber of Veterinary Surgeons, Murat Arslan also agrees, underlining that where these meats are to be used must be declared.

TurkStat data also shows that Turkey does not export or produce these commodity groups either. But this does not mean that these products are not consumed in the country. They may be used in processed foods and sold legally or they may be mixed into certain products illegally. Indeed, past inspections revealed the presence of horse meat, poultry meat and pork meat in certain foods such as sausages, braised beef, beef döner kebab, chicken döner kebab, salami, and minced meat.

So, in short, the Turkish-Sudanese trade agreement will enable free importation of certain commodities, including horse, donkey and mule meats and organs from Sudan if ratified at the General Assembly. However, ratification does not mean a certain importation of the said products. Turkey has not imported these products in years. But horse, donkey and mule meat can be found in certain foods due to lack of adequate inspection.

TGNA, Summary of the proposal

Ministry of Commerce, Detail of the agreement

Ministry of Agriculture and Forestry, Past inspections

TGNA, Summary of the proposal

Ministry of Commerce, Detail of the agreement

Ministry of Agriculture and Forestry, Past inspections