Is this a Turkish F-16 dogfighting with a Greek fighter jet?

A video, shared on social media on 8th December 2019, was claimed to show a Turkish F-16 dogfighting with a Greek Mirage 2000 fighter jet over the Aegean Sea in April 2018. The video, which was also used in a social media post by TGRT Haber, got close to 200 retweets and 1,200 likes. 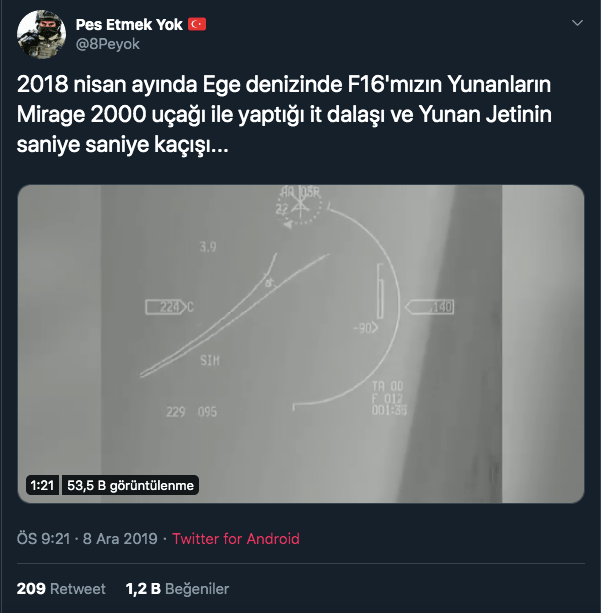 Our F-16’s dogfight with a Greek Mirage 2000 over the Aegean Sea in April 2018 and the Greek fighter jet’s minute-by-minute escape.

However, the video is not from 2018. Moreover, it is made of two disparate videos edited together.

A Yandex reverse image search of a screenshot from the first few seconds of the video returns a FALCON BMS 4.33 flight simulator video shared on YouTube on 12th July 2017 while the second part is found to date back to as early as 2007.

FALCON is a computer-based flight simulator. There are many videos available on the Internet created with this application.

Neither simulation screens nor actual flight screens for F-16, however, are similar to that of FALCON, as can be seen in a documentary by Turkish state television’s news channel, TRT Haber on how Turkish air force pilots are trained. 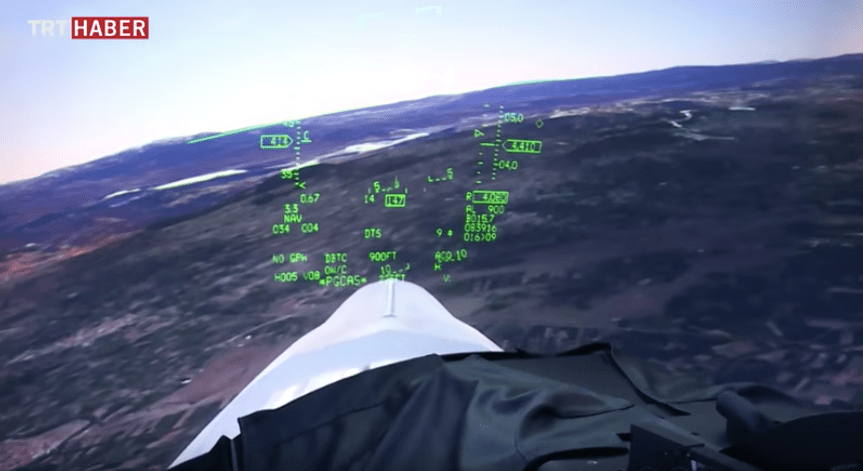 That the video is not from 2018 was also confirmed by fact-checking Twitter account, Hoax Eye and Greek fact-checking platform, Ellenika Hoaxes.

According to F16.net, a specialist website which keeps an archive of major F-16 accidents, there were no accidents or dogfights involving F-16’s and Mirage 2000’s in 2018. However, an AFP report on 13th April 2018 claimed that a Greek Air Force pilot died when his jet crashed in an encounter with a Turkish F-16 off the Aegean Sea, citing a statement by the Greek Ministry of Defense. The Greek officials’ statements were also covered by the New York Times.

Turkish officials denied having any role in the crash, TRT World and Anadolu Agency reported. Greek news platform Ptisidiastima also published an analysis concluding that the pilot’s death was not likely to have been caused by Turkish F-16’s.

Ellenika Hoaxes also confirmed to Teyit that the pilot’s cause of death could not be Turkey, that Greek state officials are still investigating the speculations around the case and that they also frequently encounter similar claims due to long-standing issues over the Aegean Sea.

Turkey and Greece got into engagement over the Aegean many times in the past, in one of which a Turkish pilot was killed on 8th October 1996.