Does the photo show thousands of Uyghur Turks waiting to be executed?

The claim that, the photo shows 3,114 Uyghur Turks who are about to be executed, is
false. The photo was taken during the shooting of the 2003 movie Carandiru, which tells
the story of the Carandiru Penitentiary massacre in Brazil in 1992.

A widely-circulated photo on social media was claimed to show 3,114 Uygur Turks who
were about to be executed. The photo, which had also been previously shared as a
“proof” of torture in Pakistan and this time got some 18,000 shares, was also sent to
Teyit for fact-checking. 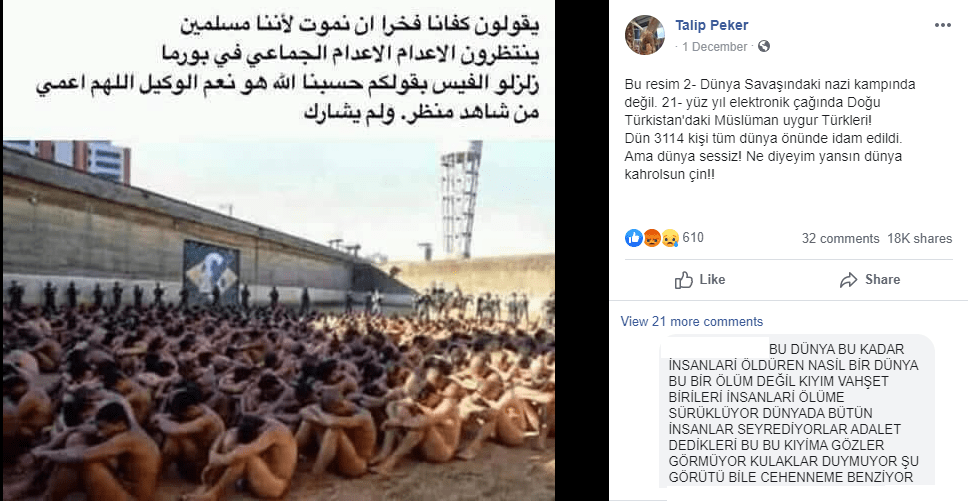 The claim is false. This frame was shot during the filming of the movie Carandiru (2003),
a prison drama based on the true story of the notorious Carandiru Penitentiary in Sao
Paolo, Brazil. Indeed, it is possible to notice the Brazilian flag hanging on the wall in the
photo.

The movie focuses on the Carandiru Penitentiary massacre in 1992, which was
launched by security forces after a skirmish between two inmates turned into a riot with
111 people being killed by the random fire opened by the military police.

On the other hand, there has been an ongoing conflict on religious and ethnic lines in
China’s Xinjiang Uyghur Autonomous Region since 1960’s. Blaming Uyghur Turks for a
number of attacks in the country, China has been keeping around a million Muslim
Uyghur Turks in so-called “re-education centers”, according to United Nations, as part of
the &quot;people’s war on terror&quot; announced in 2014. Government document leaked to the
International Consortium of Investigative Journalists in November 2019 revealed that
Uyghur Turks in the camps were locked up in high-security prisons, punished and
assimilated. However, there was no such incident, whereby 3,114 Uyghur Turks were
mass executed, as claimed.

Therefore, the photo in question does not reflect the reality and the claim is an example
of “false connection”, one of the seven most common types of false information.

Euronews, "Chinese torture" of Uighurs: What is happening in East Turkestan?, 14 February 2019

Euronews, "Chinese torture" of Uighurs: What is happening in East Turkestan?, 14 February 2019