Did melon grapefruit lemon and egg come out of watermelon?

According to the video, shared on social media and viewed more than 6 million times, a person sees respectively melon, grapefruit, lemon, and egg after cutting the watermelon. He breaks the egg at the end. 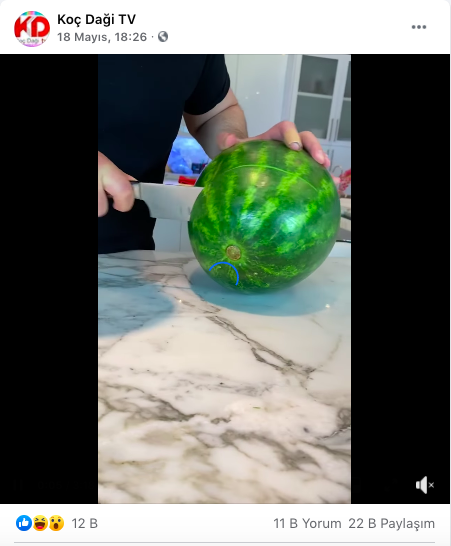 It is possible to reach the high-resolution version of the video from here. When the video uploaded to YouTube on May 1, 2020, is examined carefully, it seems that there are some clues.

For example, it can be understood that the back part of the watermelon is missing in the scene where the melon first appears after the watermelon is cut. Also, as you can see in the whole video, it is seen that all the products always come out of the front and the camera angle does not change at all.

It is possible to see similar examples as watermelon. It can be understood that the back part of the melon is also missing when grapefruit comes out of the melon.

The main point which shows us that the video is fictional is the moment when the egg comes out of the lemon. The lemon on the table does not have the back part and the egg is placed from here.

Watermelon and melon grow in the field, grapefruit, and lemon in the tree. Eggs are produced by chickens, as everyone knows. In other words, it is against the nature that all these products grow in this way. Also, a label that belongs to the company that grows the product appears on grapefruit, which comes out of the melon. The label of grapefruit, which forms the inner layers of a nested supernatural formation, destroys all the magic.

There have been some claims about the things coming out of the food with some videos shared on social media. Teyit refuted the claims that pills came out of Luppo cakes of Şölen Çikolata in November 2019.

In conclusion, the claim is not true. The post in question is an example of a manipulated content.