Did airplanes make an air show for cheering Italians up during the epidemic?

Alican Acanerler17/03/202016:45
Yorum yok
CLAIM: Italian Air Forces made an air show along with the voice of Luciano Pavarotti to cheer Italians up during the epidemic.

The video, which was shared on social media on 13 March 2020, is claimed to show the air show organized by Italian Air Forces to cheer Italians up during the quarantine days. 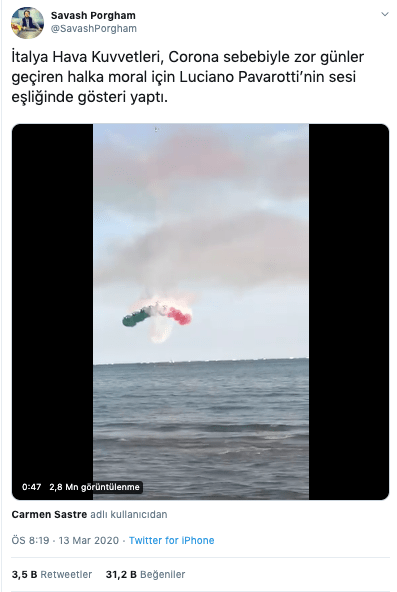 The video was shared by Savash Porgham and Aylin Aslım on Twitter and has gotten 3,500 retweets and almost 33,000 likes so far.

The video which was uploaded on Youtube on 21 September 2019 shows the air show dates back. The user uploading the video on the internet states that the event was on 15 September 2019. The first Covid-19 case in Italy was seen in February 2020.

It is possible to see that the user called Carmen Sastre is the source of the post shared by Savash Porgham on Twitter. Sastre is a Spanish journalist. The comments under her tweet, which was shared the day before, also say that the video is old dated. 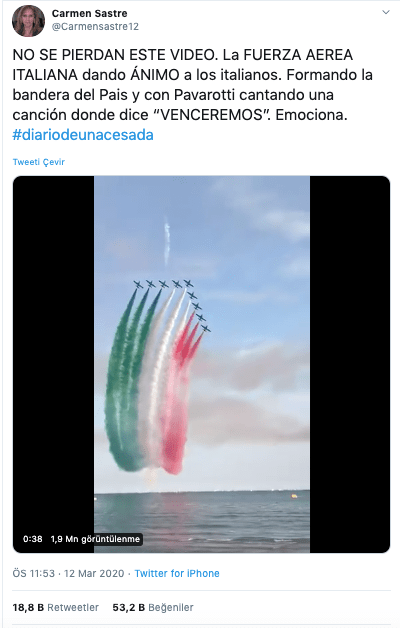 The user called Savash Porgham apologized saying that the video is not new and deleted his tweet.

The event, called Jesulo Air Show on 14-15 September 2019, can be seen on the official website of the Jesolo Municipality. Drones, helicopters and F18-model warplanes would fly with the purpose of air show; however, there is nothing in the program about which Italian Air Forces would make a show.

On the websites that share news about the Veneto Region such as Venezia Today and ViviJesolo, you can find the name of the French aerobatic team. Another video of PAF’s show in Veneto in September 2019 can be reached.

Also, the website, called Aviation Report, includes an analysis of the planes in the event in September 2019. The analysis does not say that any plane belongs to the Italian Air Forces.

In conclusion, the video was recorded in September 2019, not during the epidemic of Covid-19 in Italy. The post in question is an example of a false connection.

ViviJesolo, Articles, and photos about the shows in previous years, 30 Augustus 2019

Comune Jesolo, Informative articles on the websites of Jesolo Municipality

ViviJesolo, Articles, and photos about the shows in previous years, 30 Augustus 2019

Comune Jesolo, Informative articles on the websites of Jesolo Municipality