Can Syrian students apply to universities in Turkey with a high school equivalency diploma?

The claim that Syrian students can apply to universities in Turkey with a high school equivalency diploma issued by the Syrian interim government is false. Equivalency diplomas can only be issued by the Turkish Ministry of Education and fulfilling this requirement is not sufficient for Syrian students to be eligible to enroll in Turkish universities. 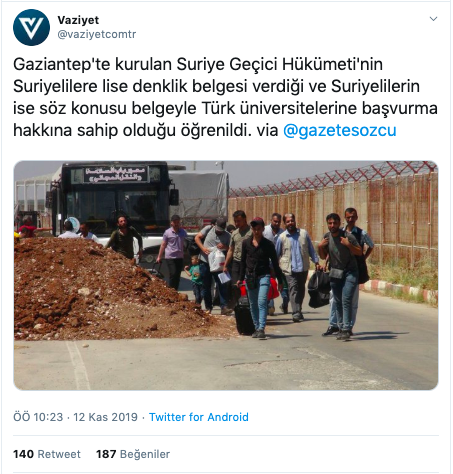 A tweet posted on 12th November claimed that Syrian students have the right to apply to universities in Turkey with a high school equivalency diploma issued by the Syrian interim government, which was allegedly headquartered in the southeastern Turkish province of Gaziantep.

Citing a report by pro-opposition daily Sözcü, the claim was retweeted by 150 users and received 200 likes on Twitter and was further shared on Facebook almost 130 times.

However, the claim is false.

According to the Ministry of Education’s Regulation on Diploma Equivalency, which regulates how international students seeking to pursue their higher education in Turkey can obtain diploma equivalency, elementary and secondary school diploma equivalency certificates can only be issued by the Ministry of Education. The Syrian interim government does not have any such authority under the existing laws.

Moreover, equivalency diploma alone is not sufficient for international students to apply to universities in Turkey. They are also required to take the Council of Higher Education’s Foreign Student Exam and satisfy specific criteria established by universities. As there is no special provision with regard to Syrian nationals in the Council of Higher Education’s Principles on Admission of Foreign Students, Syrian students are also required to meet all the said conditions just like other foreign students.

The Association of Refugees also confirmed to Teyit that the interim Syrian government is only authorized to approve and seal non-approved diplomas, a requirement by the Ministry of Education for the provision of the equivalency certificate.